The get naked species.

"Which species would you get naked for?" A question that I was once asked, and too which in a moment of madness, made possible after 2 weeks of surveying in the Scotia Sea without seeing any life, I foolishly replied the blue whale. In my defence I wasn't thinking straight, my mind befuddled by 3 weeks of early starts and long days battling the elements; but somewhere along the way I had also agreed that I wouldn't just get naked for a blue whale, but I'd run naked around the ship. Believe me, I really wasn't thinking straight, because the ship in question was the James Clark Ross (100m plus), the probability of seeing a blue whale was high, and it was autumn in the southern hemisphere so the whales were not going to be the only blue mammals on show. Fortuitously for me, and more importantly for the crew of the JCR, we sailed into a blizzard just as we were approaching a series of unidentified spouts on the horizon.

That was April 2005 and I still haven't seen a blue whale, but the idea of a get naked species has stuck. It makes for an interesting topic of conversation over dinner, and each person I've asked has a different species and a different reason. Blue whale, tiger, oceanic white tipped shark, southern right whale dolphin, gorilla, snow leopard, otter ..... etc., etc. and so the list goes on.

Why the blue whale when I could have chosen the Baji, possibly still alive in 2005, or the Vaquita, which I was lucky enough to both see and record in 2008. Good question! Perhaps it is because blue whales are the largest animal on the planet, yet we know so little about them. Perhaps it is because I've made recordings of blue whale "song" in north east Atlantic and wondered about the animals that could sing at such such low frequencies. In case you were wondering some blue whale calls go down to 10Hz, if you had excellent hearing and hadn't attended too many rock concerts when you were young you might be able hear down to 20Hz. Really impressive when you think about it. Anyway for better or for worse blue whales and I have at date with destiny, but fortunately for everyone here that special day has yet to arrive.

Why would anyone in their right mind want to breathaylse a whale? And what is about that heady cocktail of stale air and water that interests a  whale biologist?  To cut a long story short - HORMONES! That cocktail of stale air contains secrets about a whale's short term stress levels and a female's reproductive status. Cortisol is a steroid hormone produced by the adrenal gland in response to stress, and progesterone is a steroid hormone involved in pregnancy. Some very clever people at the Sea Mammal Research Unit (SMRU) and Mingan Island Cetacean Study (MICS) have been developing tests to detect trace levels of cortisol and progesterone in whale breath, and hope to measure stress responses to man made sounds and to detect which females in a population are pregnant.

So how do you breathaylse a whale? Believe me it's not easy, a lot of patience is required and you do need a whale sized breathalyser. The whale sized breathalyser is essentially a very, very, very clean (triple washed) ladies nylon stocking, in a quilters ring, attached to the end of a long, carbon fibre pole which can be placed above the whale's blow hole when it breathes. We call it "blow sampling". Below is a photographic guide to blow sampling.

Some people go to extremes to ensure that we get an excellent sample!


Once collected, the quality of each blow sample is assessed and graded on a four point scale; 1 - Poor, 2 - Medium, 3 - High and 4 - Excellent. So for example the sample collected from Meduse (see the image above - Ramp Style "Extreme" Blow Sampling) would have been graded as  excellent because the breathalyser kit was placed right above the blow holes in the direct path of the blow. Each sample is then sealed with an inhibiting agent to prevent the natural biological breakdown of the hormones we are interested in, and sent back to the lab for analysis.

Posted by Funky Fin Whale at 06:03 No comments:

"The Inspector Gadget of the Oceans".

Meet the "Inspector Gadget of the Oceans" otherwise known as the Little Leonardo W2000-3MPD3GT data logger, a very important tool in our trade and one that is helping us to shed light on many new and interesting aspects of whale behaviour.

Like "Inspector Gadget", the W2000-3MPD3GT has many tricks hidden within it's tiny body. The data logger is about the size of a small hand held torch (ø28 x 168 mm ), weighs 168g and has 512mb of memory; but for it's size it packs a mighty punch, and is able to record nine different parameters during it's ride on a whale's back.

When we get back to shore we give Inspector Gadget a good bath in fresh water, dry him down and then plug him into my laptop to download his memory.  It is only now that we get a first look at the raw data he has recorded.

Posted by Funky Fin Whale at 07:47 No comments:

Time for a little theory, but I promise to keep it simple.

How do you measure the body condition of an animal the size and weight of a truck? Cue the Inspector Gadget of the Oceans, a whale sized breathalyser, laser photogrammetry and a biopsy dart.
Posted by Funky Fin Whale at 14:23 No comments:

Tagged! Our very own "Wide Body!"

Not wanting to be "size-ist" in any way, shape or form,  but yesterday we tagged our very own "wide body", and to paraphrase Queen and Freddie Mercury " Fat bottomed girls you really do make our rockin' world go round"!


"Wide Body"! "Fat bottomed girl"! Whoah, enough of the sexist and size-ist language.  So let me apologise profusely, but both phrases are very apt descriptions of a mature, adult female humpback whale. Yesterday we tagged the oldest female in the MICS catalog, H002 or "Splish" to her friends. Believe it or not Splish is almost as old as me, and yes I know what you are thinking ..... "that's ancient!". She was first photographed back in 1980; that was the year of the Moscow Olympics, Mount Saint Helens, the Empire Strikes Back, Pac Man ......... and also the year that the American public voted in a B-Rate actor as their 40th President. In case you were wondering, I was nine in 1980.


But why all the excitement over a "Fat bottomed girl"? Female humpbacks are integral to the Miller Lab's "Body Condition Project", which is attempting to understand the relationship between stress, body condition and behaviour; and ultimately how this links to an individual's reproductive success. More details to come in future blogs!
Posted by Funky Fin Whale at 14:17 No comments: 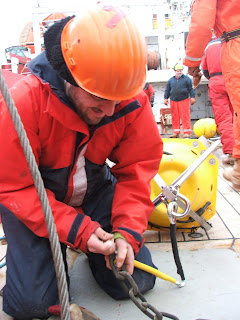 Funky Fin Whale
Rene Swift (AKA rs232 or Curly Flat after a favourite Leunig cartoon character) is a marine mammal biologist at the University of St. Andrews interested in the sensory ecology of baleen whales.